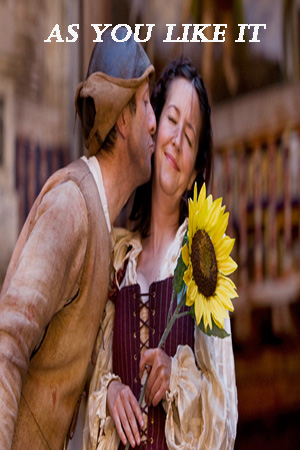 About "As You Like It"
Thea Sharrock's irresistible new production of Shakespeare's popular romantic comedy stirs wit, sentiment, intrigue and love into a charming confection which challenges the traditional rules of romance. At its heart, a feisty but feminine Rosalind (Naomi Frederick), in love with the endearingly naïve Orlando (Jack Laskey), uses her disguise as Ganymede to counsel him playfully in the art of wooing. Distraction is provided by Dominic Rowan, a remarkably funny Touchstone, and Tim McMullan, whose sonorous tones are perfectly suited to the lugubrious wit of Jaques. - Courtesy of Opus Arte

Synopsis
Rosalind, the daughter of a banished duke, falls in love with Orlando at a wrestling match. Her usurping uncle, jealous of her popularity, banishes her from court. Disguised as a boy she leaves with her cousin Celia and the jester Touchstone, to seek out her father in the Forest of Arden. Here she meets Orlando again and, under the guise of a young man, counsels him in the art of love and wooing. A firm favorite among Shakespeare's comedies, and including some of his best-loved characters, As You Like It runs the glorious gamut of pastoral romance: cross-dressing and love-notes; poetry and brilliant conversation; gentle satire, slapstick and passion.

"As You Like It is so charming, so beautifully done... The actors are plainly loving it and there is just the right dose of cheeky modernity... Thea Sharrock sent the audience into the London night abuzz with her vivid, funny, accessible show. It was all immensely cheering" -Daily Mail

"Thea Sharrock serves it up exactly as I like it: a production of such sweet humour and wit that you find yourself surrendering to it just as Rosalind allows herself to surrender to love... Naomi Frederick's superb Rosalind is a woman of wit and intelligence... Laskey's Orlando is equally bewitched, bothered and bewildered, and the playfulness between the two is a pleasure" -The Guardian

"Thea Sharrock's production is almost continuously enchanting. On a summer's night by the Thames, it is irresistible... There's a constant feeling of wit, mischief and strong sexual attraction... Every role comes to life in a production that combines great gales of audience laughter with magical moments of emotional depth" - Daily Telegraph