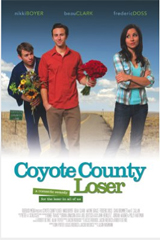 Can losers find love? Southwest desert radio station K-RAP is struggling to pay the bills when radio jock Jack Proctor (Beau Clark) zooms through Coyote County on his way to LA to take the gig of a lifetime. But the deal stalls, so Jack temps on-air work for K-RAP. Dr. Lauren Hartford (Nikki Boyer), local on-air relationship expert, gets under Jack's skin by questioning his love advice - so Jack initiates a high stakes contest to find Coyote County's biggest loser and help him woo the county's most unattainable woman. Before this battle-of-the-sexes is over, Jack and Lauren will learn love is for losers after all.